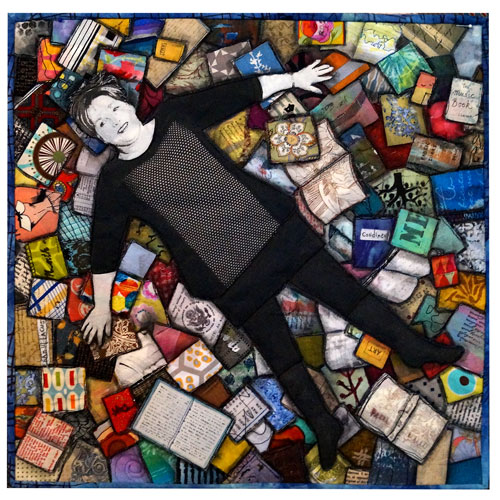 Dear Book Lovers (and others),

Have you ever been sucked in by a book with a gorgeous cover, only to discover its substance was rather disappointing? Perhaps the blurb on the back sounded exciting? Were you swayed by the stickers that advertised ‘Good Read’, ‘Award Winning Author’ or ‘Top Ten’?

As a school librarian I was amazed how many children overlooked terrific stories because the covers looked old fashioned, ordinary, or (God-forbid) a bit tatty.

People are like books. Some look flashy, capable or super intelligent. Others seem true until you scratch the surface. Others are, shall we say, a bit rough around the edges. Some of the best and most influential people in my life are the ones in plain wrappers.

In this piece I have depicted myself. I’m a little plump, and plain. I’m not young and shiny anymore. I could be any one’s mother, sister or wife. I look ordinary and you probably would not pick me up if I were a book!

But, if you look under the surface, I have much to tell. My life experiences, values, faith, creativeness, skill, my loves and losses. I am unique.

What is under your surface?

When I first came to Picola to visit my boyfriend ( and future husband), Cameron Lancaster on his 5th generation farm, I thought I had come to the end of the world! There seemed to be nothing to make it stand out amongst all the other tiny towns in Australia. Hot dry, dusty, flat, no shops, no anything! The nearest University was two hours drive away.

When I married Cameron and shifted into the area I tried to have a positive attitude, saying things to myself like: “bloom where you are planted” and “love can cover a multitude of sins”.

Twenty six years later I can say that I truly love this place and the people in it. I’ve become like Ruth in the bible when she says in verse 1:16 …”Where you go I will go, and where you stay I will stay. Your people will be my people…”. After you have been here for a while you discover that there is so much richness. There is history, there is a community that looks after one another, there is beauty all around from the tiniest native Chocolate Lily to the rare Superb Parrot, to the majestic River Red Gum, hidden away in the forest. I even love the Peppercorn trees!

My daughter Erin and her husband Lachlan will be performing ‘the Picola’ song’ at the exhibition opening. Her lyrics beautifully describe how she sees the beauty of her hometown shining through the ‘cracks’. Tammy Muir, our famous local bush poet, will also be performing ‘Ode to Picola’.

The above quilt called ‘Blue sky, red dirt, yellow Billy Buttons‘ is a piece I have just finished for the above  exhibition at the G.R.A.I.N store, an art gallery in close-by Nathalia.

I have used a linocut of billy buttons (Picola is not know for billy buttons but there are a few that grow down our road) as a starting point. The work was then pieced together with hand dyed fabrics. The quilting added more line and texture over this improvised pieceing. This is a first piece in hopefully a series on these gems.

This is a detail of my latest quilt ‘Michellia 2’, which I have entered into Australia Wide4 with Ozquilts. I wont know until August if it’s been selected. 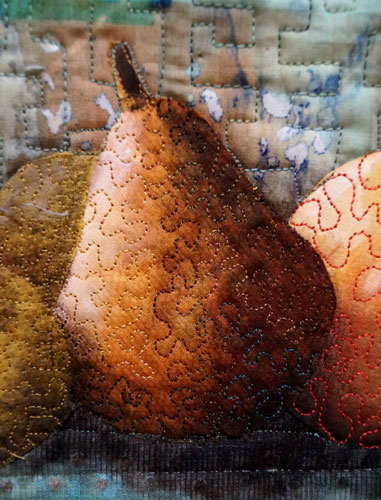